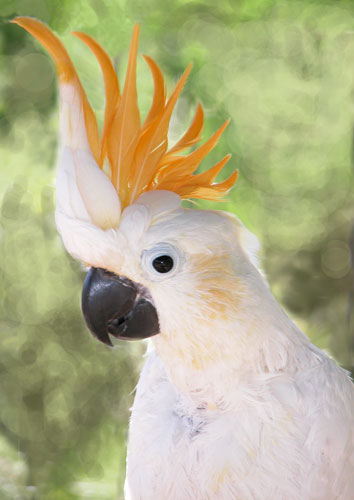 The hallmark of the Lesser Sulfur Crested Cockatoo is his striking yellow crest. Their erect crest stands proudly atop his head. The crest of this cockatoo is one of the largest and most impressive among all members. When relaxed the crest lies facing back on his head, but when excited or stimulated it rises straight up standing several inches in height. The bright yellow feathers are accented by several white feathers beginning the crest at the front. Aside from the brilliant yellow crest the rest of the Lesser Sulfur Crested Cockatoo's plumage is white. In addition they have soft yellow cheek patches and yellow can be seen on the underside of the tail and wings. They are smaller than some of the other Cockatoo species measuring in at thirteen inches (33 cm) with a wing length of eight to nine and a half inches (21 - 245cm). They black bills and dark brown iris. Males and females look identical except the female typically has a smaller bill and a lighter colored iris, which is brown or reddish in color. The immatures have dark iris in for males and females with lighter feet than the normal adult gray.

Breeding Breeding of the Lesser Sulfur Cockatoo is achieved quite often. The female will lay two to three eggs and they will incubate for approximately 24 days. The hatchlings will fledge in eight to ten weeks. It needs to be noted that males can be very aggressive during breeding. Babies should be removed at the proper time as the males may attack them. Males have often been known to kill females if they are kept in a smaller aviary. To prevent this problem you must use a very large aviary. Up to two clutches a year are possible.

The Lesser Sulfur Crested Cockatoo has a fairly wide natural range beginning in Australia and also seen in Singapore, and possibly Indonesia.

Why do they always start off the evening news with "Good evening" when all they do is tell you why it isn't? -- Unknown