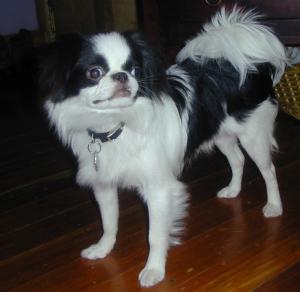 The Keeshond (pronounced KAYZ-HOND; plural: Keeshonden) is a medium-sized dog with a plush two-layer coat of silver and black fur with a 'ruff' and a curled tail, originating in the Netherlands. Its closest relative is the Pomeranian. Originally called the German Spitz, the name was officially changed to Keeshond in 1925. A member of the spitz group of dogs, the Kees is 17 to 18 inches (about 45 cm) tall and weighs 35 to 40 pounds (about 16 to 18 kg). Sturdily built, they have a typical spitz appearance, neither coarse nor refined. They have a wedge shaped head, a medium-length muzzle with a definite stop, small pointed ears and an expressive face. The tail is tightly curled and, in profile, should not be carried as so to be distinguished from the compact body of the dog. Coat Like all spitzes, the Kees has a profuse double coat, with a thick ruff around the neck. The tail is well plumed, and feathering on the fore and hind legs add to the soft look of the breed. The coat is shown naturally, and should not be wavy, silky, or long enough to form a natural part down the back. Color The Keeshond is a color-specific spitz type; many of the names of the dog refer to the distinctive wolf color of the breed. The color is a mix of grey, black and cream. The top coat is tipped with black, while the undercoat is pale grey, white, or cream (never tawny). The color can range from very pale to very dark, but the Kees should neither be black nor white, and the ruff and "trousers" of the hind legs should be a distinctly lighter grey. The other important marking is the "spectacles," a delicate dark line running from the outer corner of each eye toward the lower corner of each ear, which, coupled with markings forming short eyebrows, is necessary for the distinct expressive look of the breed. All markings should be clear, not muddled or broken.

Keeshonden are prone to hip dysplasia, luxating patellas (trick knee), epilepsy, Cushing's disease, hyperparathyroidism, hypothyroidism and von Willebrand's disease. Keeshonden are also prone to bloat. A healthy, well-bred Keeshond can be expected to live between 12 and 15 years on average. Grooming Due to their double coat, a thick undercoat and a long haired coat above that, Keeshonden need regular brushing once every two weeks to maintain the coat and ward off doggy odor normally associated with breeds that have hair. Proper grooming requires about an hour to an hour and a half to groom all the way to the skin. If the undercoat is not groomed out properly then eventually the undercoat will mat and die and the dog may acquire skin problems. The Keeshond blows its coat twice a year. This entails shedding their undercoats completely during an intense shedding period that can last up to three weeks from start to finish. The hair comes out in large and small clumps and lots of vacuuming and brushing are in order. During the "blow", a Keeshond should be groomed once or twice a week to facilitate rapid removal of the dead undercoat. If the coat isn't combed out properly during the yearly sheds, hairs from that period may be shed for weeks or months after. A bath once or twice a year may be all that is called for, as Keeshonden often lack the strong doggy smell of other breeds. Loose dirt can be brushed out, though any dog that gets very dirty should be washed. Keeshonden (or any spitz), unlike breeds such as poodles, should not be clipped or shaved. Doing so has many detrimental effects on the coat, which may grow back improperly, tangled, or not at all. The long coat, which may appear hot during the summer, is in fact light and airy, and protects the Kees from excess sun. The coat is essential for protection against all the elements, and lacking the outer guard coat leaves the dog vulnerable to cold, rain, and insects like mosquitoes and fleas. The dirt-repellent effect of the coat will also be lost, causing frequent bathing to be necessary. The coat also looses its distinct color, as the black tipping on the hairs will be shorn off. If frequent brushing is too much effort, it is better to chose another breed rather than clip the Keeshond short.

Keeshonden tend to be very playful, with quick reflexes and strong jumping ability. Keeshonden can be stubborn, but they are quick learners and eager to please. Because Keeshonden are quick learners, they also learn the things you didn't necessarily wish to teach them - very quickly. However, Keeshonden make excellent agility and obedience dogs. So amenable to proper training is this bright, sturdy dog that Keeshonden have been successfully trained to serve as guide dogs for the blind; only their lack of size has prevented them from being more widely used in this role. They love children and are excellent family dogs, preferring to be close to their humans whenever possible. They generally get along with other dogs as well and will enjoy a good chase around the yard. Keeshonden are very intuitive and empathic and are often used as comfort dogs. Most notably, at least one Keeshond, Tikva, was at Ground Zero on 9/11 to help comfort the rescue workers. They are known by their loud distinctive bark. Throughout the centuries, the Keeshond has been a very popular watch dog on manors in the Netherlands and middle Europe, as well as famously being a watch dog on barges. This trait is evident to this day, and they are alert watch dogs that warn their owners of any new visitors. Despite being a loud and alert watchdog, Keeshonden are not aggressive towards visitors. They generally welcome visitors affectionately once their family has accepted them. Unfortunately, excessive barking may become a problem if not properly handled. As with other watchdogs, Keeshonden have a distinct territory that they want to guard. Therefore, a happy Keeshond should have a yard to watch out for.

The Keeshond was named after the 18th-century Dutch patriot, Cornelis (Kees) de Gyselaer, leader of the Dutch rebellion against the House of Orange. The dog became the rebels' symbol, and when the House of Orange was returned to power, this wonderful breed almost disappeared. Luckily, the breed continued as a guard on Dutch barges. Later, in the 1920s, Baroness van Hardenbroeck took an interest in the breed and began to build it up again. The Keeshond was accepted for AKC registration in 1930. Now bred for many generations as a companion dog, the Keeshond easily becomes a loving family member. Breed pronunciation Out of the 350 some purebreds, the Keeshond has possibly the most mispronounced name. "Kay sawn", "Case-hond", "k?s-hond", "keys-hând", "keesh-ond", and "keesh-hond", as so many will say, are all improper pronunciations. The proper pronunciation is "kayz-hond" or "kayz-hawnd" with the proper pronunciation of the plural being "kayz-honden" or "kayz-hawnden". Colored Keeshonden Historically, Keeshonden came in several colors—white, black, red, orange, orange-shaded white (also called orange and cream), and silver gray. Originally, like many other spitz-types, many colours, including piebalds, were allowed, but as time progressed, only the silver-grey and cream (wolf-colored) color was finally established into the Wolfspitz type. While colored Keeshonden can have terrific conformation, they're not allowed to be shown in the show ring. Colored Keeshonden are considered "pet quality" and thus should be fixed. Recently, the appearance of oddly-colored Kees in otherwise long, purebred lineages has caused research into the early history of Keeshond coat colors. Because of this, some breeders wonder whether the Keeshond should be bred for colors other than grey. There are many bloodlines carrying the colored gene, and rather than examples of mixed breeding, colors are legitimate throwbacks to an earlier era of the breed. No one knows the exact number of colored Keeshonden born in the United States. Incorrect, or incomplete, accounts of documentation make it impossible to determine how many colored Keeshonden, and of which colors, have been born in the United States.