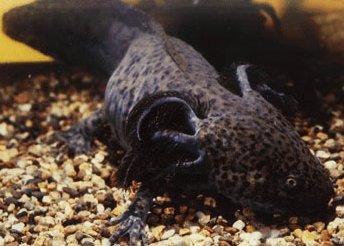 Fairly large animals, Axolotls can reach about 30cm (12 inches), from nose to tail, and average between 7 and 12 inches. They are dark colored with greenish patterns and sometimes have silvery patches on the back. The Axolotls eyes are yellow and iridescent. The Axolotl has a large mouth, known as a "cup-mouth," and a blunt nose. Because of its neoteny, the Axolotl retains the feathery gills and tail fins throughout its adult life. Although the axolotl can live its entire life, and indeed breed, in its larval stage, its development into a full-grown salamander can be induced by a lowering of the water depth to less than the height of the animal, accompanied by a sudden temperature increase. This metamorphosis may drastically decrease the lifespan of the animal. After development to adult-stage, the axolotl will live happily on land. The mature form very closely resembles the Tiger Salamander. Some sources maintain that hormone treatments can be used to induce to metamorphoses

Axolotls should not share their living space with other animals (especially fish, since they will tend to gnaw at the axolotl's external gills), including other Axolotls when young. Older Axolotls can live with other Axolotls. The temperature of the aquarium should be around 16 or 18 degrees Celsius ( 57 to 68 degrees Fahrenheit). Lower temperatures result in slow moving salamanders with slower metabolism, while higher temperatures cause stress, increased metabolism, and more eating. The water in the Axolotl's aquarium should have a pH of between 6.5 and 8. It should be free of chlorine. Axolotls prefer swimming in relatively hard water. If the tap water available is soft, it can be supplemented with added salts such as Holtfreter's and Steinberg's solutions, the solutions used by Indiana University. An adult Axolotl should be kept in an aquarium at least 50 centimeters, or 20 inches, in length. Larger or more numerous Axolotls require larger tanks. The Axolotl's tank should have about 15 centimeters (6 inches) of water in it. Filters are essential as Axolotls produce a lot of waste. The water should be calm. They enjoy having plants, caves, and other decorations to hide in.

They are common only in Lake Xochimilco and Lake Chalco and are now considered an endangered species, however, large numbers of the Axolotl are bred each year for use in laboratories because of their amazing regenerative capacities.

The Axolotl is a relatively large salamander that is native to the part of Mexico surrounding Xochimilco. They are very closely related to the Tiger Salamander and the Spotted Salamander. Axolotl are moderately easy to care for and are popular as pets and laboratory animals, although the wild Axolotls are considered an endangered species. A salamander, the Axolotl is equally at home in the water and on land. The Axolotl, unlike most animals, is capable of regenerating whole limbs if injured. The Axolotl is also unique because it exhibits neoteny, meaning that rather than undergoing metamorphosis from egg to larva to adult, the Axolotl halts its development in the larval stage. This means that it retains its gills and fins, although it grows much larger than most salamanders do in their larval stage. Many scientists believe that this neoteny is a "backward" step in evolution, as the Axolotl is descended from the Tiger Salamander, and can interbreed with this species, that does not exhibit neoteny. When other amphibians exhibit neoteny, it is usually caused by low levels of iodine. In the case of the Axolotl, it is entirely genetic. Although they are carnivorous animals, the Axolotl has only rudimentary teeth that are better suited for gripping than for biting. This results in their swallowing food whole, and they will eat both dead and live animal matter. To feed, the Axolotl opens its mouth suddenly and water and any food rushes in. The most common foods fed to Axolotls in captivity are earthworms, bloodworms, and blackworms. They are also often fed vitamin and protein supplements. They prefer food that sinks in the water to food that floats.

The Axolotl was first studied at the Jardin des Plantes in Paris in the 1860s. Today, most Axolotls kept in captivity are descended from those animals. Indiana University keeps a very large colony of Axolotls for research purposes. The Axolotls are native to the regions of Mexico around Lake Xochimilco and Lake Chalco. Since Mexico City has grown, the natural habitats provided by the lakes have disappeared. Only small canals now exist where Xochimilco once was. With the destruction of the lake, comes the destruction of the species that live there, including the Axolotl. It is now on the Endangered Species list. Luckily, because Axolotls are so popular for research and are bred so much in captivity, they are very rarely caught in the wild for research or personal collections. The name of the salamander, "Axolotl," comes from the Nahuatl language of a tribe of Aztecs. Axolotl translates directly as "water-dog," from atl meaning "water" and xolotl meaning "dog," although it is also thought that the name is related to the god of death and deformation, Xolotl.

"The eternal mystery of the world is its comprehensibility." -- Albert Einstein