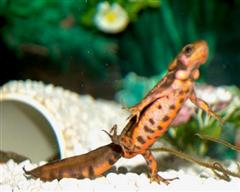 Fire Belly Newts can be burned if you use a reptile light for their tanks. Incandescent or florescent lighting is recommended. Firebelly Newts are very hardy and have a long lifespan. The average lifespan for Fire Belly Newts ranges from 1 to 60 years depending on care. Make sure you house your Firebelly Newt in an escape-proof enclosure. Like other newts they are notorious for their ability to escape! Breeding In the wild, Fire Belly Newts will often breed after resting during the cool season. It is recommended to duplicate this when attempting to breed in captivity. Prior to breeding, it is recommended to lower tank temperatures to 40 degrees Fahrenheit. Lowered temperatures are used to simulate winter, and thus should last for approximately 45 to 60 days. Breeding tanks must be equipped with plants. Once ready to breed, temperatures should be increased. Males will initiate breeding by fanning their tail at the female. The fanning motion releases pheromones to attract the female. Once the female is interested, the male will hold the female around the neck; a process called "amplexus". The male will then drop a spermatophore on the ground and move the female over it. The female will then take the spermatophore into her cloaca. Once pregnant, the female will deposit her eggs on the plants within the tank. The eggs are fairly large and easy to see. The eggs will take somewhere between 12 and 17 days to hatch.

The natural habitat of the Fire Belly Newt is the cool, still waters of heavily vegetated ponds.

The Fire Belly Newt is known as the Japanese Fire Belly Newt, Japanese Fire Newt, and Aka-Hara-Imori in Japanese. By whatever name, this wonderful newt can make a great addition to even a beginning hobbyist's collection because they are relatively easy to care for and inexpensive. The Fire Belly Newt is quite mellow. The best time to find them being active is around feeding time. Captive Fire Belly Newts should be fed live food. Some good choices include, small earthworms, waxworms, bloodworms, crickets, and slugs. Feeder fish can also be given occasionally, but they should not comprise the entire diet. Some will also eat frozen food such as bloodworms. Many keepers also recommend vitamin supplements. Mealworms and Tubifex worms are not recommended. Fire Belly Newts may be intra-specifically aggressive, especially with a limited food resource. If they are kept in an over crowded and/or underfed situation they will quite often turn to cannibalism and/or mutilation. This can often be avoided if they are fed at least once daily, though twice a day feeding may be preferable. Signs of aggressive behavior include white plaques or ulcerations. Often times these may be mistakenly identified as symptoms related to poor water quality. Salt baths can alleviate the symptoms, but more space and more frequent feeding is the best way to prevent this problem. The Fire Belly�s enclosure should have a layer of substrate on the bottom. This can be made from gravel and rocks. Rocks should be large enough to poke out of the water to provide basking spots. The Fire Bellied Newt also seems to appreciate the presence of tunnels and other dark hidey places. Floating plants are also a nice addition to their enclosure. They will often float on them and will sometimes nibble on them as well. The captive environment should mimic their natural surroundings as much as possible. The Fire Belly Newt, like many amphibians, is largely aquatic. Some have reported exceptions, but generally they like to spend most of their time in water. They should always be given the option to move to and from land. A two-thirds aquatic to one-third land ratio seems to do quite well. A ten-gallon tank should sufficiently house two to three newts comfortably. If you wish to house more, a tank with more floor space is recommended. It is very important to change water frequently, as well as have a good filtration system installed. The filtration system should be set to a minimal water flow and not at all turbulent. A gravel and sand substrate is recommended. It is important to use large pieces of gravel as smaller pieces can be ingested. The sand should be placed underneath the gravel. The purpose of the sand is for plants. The gravel should be increased until it rises into your land area. Placing rocks or logs on the land area is recommended because it provides nice little hiding places. Some will cover the land area with moss and the Fire Belly Newts seem to like it. Plants are also a nice addition to the land area. Floating plants like elodea are wonderful decorations for the aquatic parts of the tank. The tank should also provide several dark hiding places for them as well. Temperature should be cool. They seem to do well at temperatures ranging from 60 to 70 degrees Fahrenheit. It has been reported that they will survive lower temperatures of 40 degrees, but this is not advised. If temperatures are too high, or they are overcrowded, Fire Belly Newts may experience appetite loss and other health problems, such as bloat, which can be a fatal condition. It should also be noted that bloat can be caused by the ingestion of plant matter, since this is a carnivorous species. All in all the Fire Belly Newt is easy to keep, as long as his requirements are met. These newts are great for beginners.

The Fire Belly Newt originates in Japan and parts of China.

"I never think of the future - it comes soon enough." -- Albert Einstein