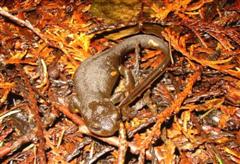 By maturity, Rough Skinned Newts can measure up to 8 inches, although the tail makes up more than half that length. With bumpy skin, the Rough Skinned Newt is a dark or light shade of brown or black. Its underside may be orange or yellow. The lower eyelid of this salamander is dark, and the teeth of its upper lip are in a V formation. They lack costal grooves and their limbs are comparatively long. Male Rough Skinned Newts have longer tails, legs, and more swollen vents than most females. Because Rough Skinned Newts have very poisonous skin secretions, they can cause death when ingested in sufficient quanties.

Generally, Rough Skinned Newts may be found in elevations between sea level and 9,000 feet. During the day, they hide under rocks, logs, or leaves. Most often, they are found near permanent bodies of water, especially swamps near the edges of forests.

Lacking the overall sliminess that many people believe is characteristic to salamanders, the Rough Skinned Newt has warty skin instead. These interesting animals are very poisonous if ingested, but they can be handled and may often be quite docile. Rough Skinned Newts become quite aquatic during breeding season and even afterward throughout the summer. They have bright colored undersides to warn predators that they are poisonous, and when alarmed they will point their heads and tails into the air while wiggling their bodies. The Garter Snake can resist the Rough Skinned Newt's poison, and can prey upon these animals. Apart from its alarm display, the Rough Skinned Newt is generally a slow moving and docile salamander.

The range of Rough Skinned Newts encompasses much of the Pacific Northwest. They are found more often along the coastal areas of this region through the United States and Canada.

Active even in daytime, Rough Skinned Newts feed on invertebrates like slugs, worms, and aquatic insects. Sometimes, they will eat tadpoles.
Sponsor Ads:

Being negative is easy. There will always be a downside to everything good, a hurdle to everything desirable, a con to every pro. The real courage is in finding the good in what you have, the opportunities in every hurdle, the pros in every con. -- Carolyn Hax