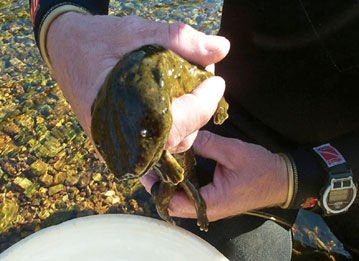 The Hellbender Salamander is a purely aquatic animal with a very flat dorsoventral body and head. The Hellbender lacks eyelids due to the fact that this Salamander never undergoes complete metamorphosis. Younger Hellbenders have gills, but as they reach about 3 to 5 inches long they maintain only one pair of gill slits and these appear to be a circular opening on the side of their neck. The Hellbender also has lungs but these are only used for buoyancy and it is the folded skin found on the sides of this Salamander, which works as its respiratory system. Young Hellbenders have a variety of dark spots on their skin that can be seen easily if they have a lighter pigment of skin color underneath this. The skin pigment of an adult Hellbender can vary from a yellowish brown to almost black color with some dark and light spots, which are not as easy to see in adulthood. If you turn a Hellbender over you will notice their orange, gray, or brown belly. Although an exact reason as to why is at this point unsure, Hellbenders are capable of changing color as well. Adult Hellbenders have been known to reach lengths of 29 inches, however most adult Hellbenders will attain an adult length of somewhere between 11 and 20 inches. The females generally grow larger than the males. Hellbenders are among the largest salamanders in the world, though the Japanese Giant Salamander is larger, growing to lengths of 36 to 60 inches. Hellbenders have four toes on their front feet and five on their hind feet. The pads on the tips of their toes allow them to navigate well on algae covered rocks, as they prefer walking along the bottom of their surroundings as opposed to swimming. Their legs are short and their tail is about one third of their body size as adults.

In the wild Hellbenders require fast flowing streams with enough oxygen to sustain them, so if you are planning on owning a Hellbender as a pet, keep this fact in mind. Hellbenders require well-oxygenated water to survive and fast flowing water is a necessary addition for any tank. Breeding Hellbenders are not typical of other salamanders when it comes to breeding, in this sense they act more like fish. In the wild, typically during the months of August and September a male Hellbender will dig out a nest beneath fairly large rocks at the bottom of a stream. He will then wait there for a female Hellbender to enter or he will force one into the nest. The female lays a string of a couple hundred eggs, which group together to about the size of a ping-pong ball. When this is done the male Hellbender will fertilize the eggs and then remain in the nest for the eight weeks that it takes for them to hatch. It is not rare for the parents or other Hellbenders to eat the eggs.

The Hellbender Salamander is a unique looking creature that has captured the interest of many hobbyists in the United States. The Hellbender is a salamander, and would not make a good pet someone who is looking for a salamander to hold. For those who are interested in just looking this pet would do just fine. Hellbender Salamanders cannot be contained with other Hellbenders since the only time they come into contact in the wild is during their reproductive season. Any other contact could prove disastrous for one or both of these animals. Due to the Hellbender's carnivorous diet any crayfish, smaller fish, insects, or worms are fair game in this animal's mind. For this reason the Hellbender should not be placed with any other aquatic animals that it would find suitable to eat. In the wild this Salamander is very solitary and so it should remain this way if in captivity. Being that it is primarily nocturnal the Hellbender should be supplied with adequate rock shelters to hide itself in. Although the Hellbender avoids game fish, this fact has not stopped the folklore stories, which blame the Hellbender for a bad day of fishing. It is often said that a Hellbender will slime a fisherman's line or chase the fish away. These untrue stories also came with new names for this Salamander such as "Allegheny Alligator" and "Devil Dog". The Hellbender Salamander is currently listed as endangered, threatened, or of special concern in most states where they are found.

It is usually seen in various drainage systems and fast flowing streams within New York, Pennsylvania, Missouri, Ohio, Kentucky, Tennessee, Alabama, Georgia, North Carolina, and Virginia; but it is not limited to these states. Some states may require permits to keep them.