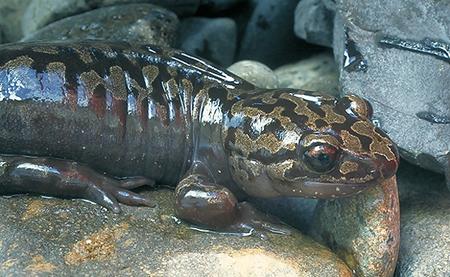 Pacific Giant Salamanders should have plenty of hiding places. They prefer cool temperatures, although they may be tolerant of temperatures over 85 degrees Fahrenheit for short periods. It may be preferable to have a filter in the tank of a Pacific Giant Salamander that creates a sort of current and keeps the water well aerated. Breeding Generally, Pacific Giant Salamanders do not breed until they are about six years old. The breeding season probably lasts from spring through fall, and during this time the male will produce spermatophores. It is not understood how the female Pacific Giant Salamander picks these up. She will eventually lay between 85 and 200 eggs in a hidden underwater area. They may be laid in a clump, or singly, and she will fiercely defend her eggs for up to seven months. The eggs are usually attached to some surface. The larvae that hatch live off of the yolk from their eggs for another three months before leaving the nest, and because of the time consuming nature of guarding them, female Pacific Giant mothers get little to eat. Due to the stress of reproduction, these salamanders are only reproduce once every two to three years.

Generally quite secretive and nocturnal, Pacific Giant Salamanders spend the majority of their days hidden under leaf litter, damp moss, or rotten logs. They are most often found on forested slopes and may only come out in daytime, during periods of heavy

Generally found in quiet areas that have not been exploited for timber, Pacific Giant Salamanders are located throughout the Pacific Northwest of North America, in coastal areas from Canada's British Columbia south to northern California in the United States. Because their habitat is being destroyed, the Pacific Giant Salamander has become endangered in many areas of its range.

"Men occasionally stumble over the truth, but most of them pick themselves up and hurry off as if nothing had happened." -- Winston Churchill