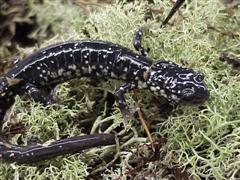 Slimy Salamanders have slender bodies and can grow up to between 5 and 7 inches in length. Their skin is glossy and black. It is accented with white or brassy speckles, camouflaging the salamander so it looks like a lichen-covered stick. When males perform courtship motions, the spots turn pink and eventually red. The undersides are similarly colored, but in paler shades. They do not have any lungs; rather, Slimy Salamanders must keep their skins moist in order to use oxygen from water they absorb. Slimy Salamanders have nasolabial grooves and about 16 costal grooves.

Slimy Salamanders need terrariums with lots of hiding places. A mixed soil substrate may be appropriate and can be misted regularly to maintain humidity. Make sure the salamander has a shallow water bowl that it can easily get into and out of. Slimy Salamanders should only be kept with salamanders of the same size, and if you are keeping more than one, the terrarium should be very large and should include a number of hiding or escape areas. Breeding Generally, female Slimy Salamanders are longer than males. Breeding usually occurs in the spring. Courtship involves a physical interaction in which the male rubs his tail under the females chin. He will also climb atop her and move his body rhythmically. Eventually, the male produces a spermatophore that the female must take up. She will generally lay groups of eggs in a rotting log or other damp, protected terrestrial location. There are usually 12 eggs in each group. The development period for the eggs lasts about three months. These eggs will hatch into fully developed, though lightly colored, Slimy Salamanders that will reach sexual maturity in about three years.

They are most usually found in wooded areas. Occasionally, they may be seen moving about after heavy rainfall.

Slimy Salamanders are native to the eastern central regions of North America. There are actually about 13 different species of Slimy Salamander, but differences are so minimal that it is quite difficult to discern between species.