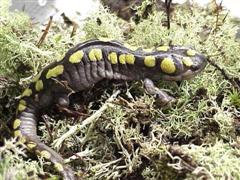 The Yellow Spotted Salamander will reach a size of 6 to 8 inches at maturity.The Yellow Spotted Salamander typically has about 24 to 45 large yellow spots on its dorsal side, though on rare occasions individuals completely lack spots. These spots are on top of a dark blue to black base color. Their body has a stout shape, and they have a dipped and rounded snout. Their legs are large and strong, and may have four or five toes.

The Yellow Spotted Salamander can be fed insects. They should be kept at mild temperatures and light humidity. Yellow Spotted Salamanders should have access to a good-sized water pool that they can easily get into and out of. Breeding Yellow Spotted Salamanders begin to breed in the springtime. They follow the streams of melting snow to breeding pools. The male will arrive sooner than the female, and there will be an overabundance of males, who will compete by swimming around and rubbing each other. Males will deposit spermatophores, which will be picked up by the female's cloaca. Females will lay egg masses on submerged objects. The average number of eggs in the milky white mass is 125. The eggs will hatch in 31 to 54 days. The larvae will transform in 61 to 110 days.

The salamanders actually were living in the logs that the men would burn.

The Yellow Spotted Salamander can be found throughout North America, from Texas to Nova Scotia. The name salamander means "live in fire". Back in medieval times, people observed salamanders walking out of fires.

"There are three ways in which a ruler can bring misfortune upon his army: (1) By commanding the army to advance or to retreat, being ignorant of the fact that it cannot obey. This is called hobbling the army. (2) By attempting to govern an army in the same way as he administers a kingdom, being ignorant of the conditions which obtain in an army. This causes restlessness in the soldier's minds. (3) By employing the officers of his army without discrimination, through ignorance of the military principle of adaptation to circumstances. This shakes the confidence of the soldiers." -- Sun Tzu, The Art of War