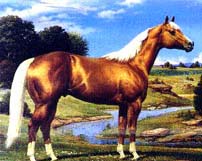 Palomino is a horse color not a breed. The characteristic palomino color is that of a newly minted fourteen-karat gold coin with variations from light to dark. The skin is usually gray, black, brown or motley without underlying pink skin or spots, except on the face or legs. The eyes are usually black, hazel, or brown. The mane and tail must be white with not more than fifteen percent dark, sorrel, or chestnut hairs. Conformation depends on the breed represented but most stand between 14 and 17 hands. Technically, the palomino is not so much a color as it is a lack of color due to the dilution gene. The best cross for obtaining a palomino has been the crossing of a palomino to a chestnut. Crossing a palomino to a palomino most often produces a cremello (often called wrongly, an albino).

Palomino horses possess a golden coat color, dark skin and eyes, and a white main and tail. The Palomino did not originate in the United States,yet the United States is were the registry associations for the palomino orginated. The exact origin of the golden color is unknown, it is believed to be a descendant of Arabian color patterns. The biblical book, Zechariah, written in 519 B.C., mentions horses possessing bay, sorrel, black, grey, and white coat colors. Because of the variety of color crosses that produce the Palomino color, it is assumed the color is as old as the animal. Palomino horses have filtered their way through history, and are mentioned and seen in a variety of literary and artistic works, including Botticelli’s 1481 painting "The Adoration of the Magi", which hangs in the National Gallery in Washington D.C. Today Palomino horses may be seen in every aspect of the horse industry from working on ranches, to being displayed in the show ring, as well as running on the racetrack. A favorite to a variety of clubs and organizations, the Palomino has been seen as a parade horse, in rodeos, and as a trail and endurance horses. Though many types of horses may bear the gold coloring, the Palomino Horse Breeders of America represent only Quarter Horses, Tennessee Walking Horses, Morgans, Arabians, and American Saddlebreds in the PHBA registry.

"Peace proposals unaccompanied by a sworn covenant indicate a plot." -- Sun Tzu, The Art of War